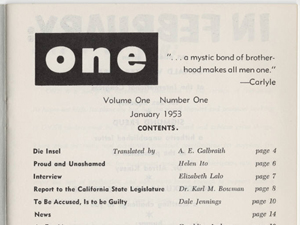 The Beinecke holds one of the largest collections in the world of gay and lesbian periodicals published before the gay liberation era of the 1970s, as well as an extensive collection of more recent serials. Gathered by Knud Rame, a Danish bookseller and astrologer, the Rame collection contains more than 3,400 issues of some 200 different titles, dating from 1906 to 1993. This extraordinarily expansive group of periodicals features items in English, French, German, Danish, Norwegian, and Japanese. The earliest item is a 1906 issue of Adolf Brand’s Der Eigene, which is generally regarded as the world’s first homosexual periodical.

These titles are in the process of being cataloged in Orbis, the Yale University Library catalog. Any titles not yet in Orbis can be found in the Beinecke Library’s Uncataloged Acquisitions Database.